skip to main | skip to sidebar

MVVM can be an awesomely productive way to build maintainable, testable, rich GUI applications. It can also be an over-complicated, long-winded and opaque way to produce code nobody else understands. The line between the two can be subtle and easy to trip over.

In this workshop, Malcolm will start from an overview of MVVM, and then go through the development of an MVVM-based application from scratch in multiple short sprints, showing how to get the clean separation and testability of MVVM, without losing the productivity you’re used to in RAD Studio.
Along the way he’ll cover off topics such as:

Malcolm Groves is a passionate coder and codes in a variety of languages such as Delphi, Scala, Objective-C, Python and Javascript.
Until recently Malcolm worked for Embarcadero Technologies being responsible for Asia Pacific and Japan.
Malcolm now has his own training and consulting company in which he offers training and consulting as well as being a reseller of different products.
Malcolm is married to Julie, and they have two children. Apart from being a family man and working fulltime, Malcolm also plays and restores old fender guitars and practices Hapkido. Malcolm’s welding skills must remain unmentioned in this context.
Indsendt af Jens Johansen kl. 17.44 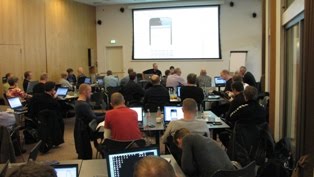